How Emissions can Evolve Downwind: Part I 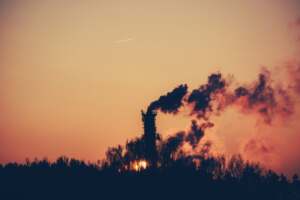 Many compounds are well known pollutants. For example, directly emitting heavy metals and greenhouse gasses has a documented negative effect on the surrounding environment. Yet some emissions neglected for having no immediate adverse effects can still be just as harmful to the atmosphere.

This series aims to share the impact caused by secondary pollutants – compounds that are formed through chemical reactions kilometres downwind of the emitting source. Even though their reactants may not be obviously hazardous, these pollutants remain serious environmental issues.

Nitrogen is an odourless, colourless gas that makes up about 78% of the Earth’s atmosphere, usually in the form of nitrogen molecules (N2). Although N2 is safe to breathe, it can become hazardous if oxidised through high temperature combustion and the presence of oxygen. Furthermore, these reactive oxides can go on to form dangerous secondary pollutants. In part one of our series on secondary pollutants, we explore some of the chemistry behind the formation of nitrogen oxides as well as the more involved pollutants that require these nitrogen compounds to exist.

Nitrogen Oxides (NO, NO2, NOx)

At high temperatures, like those found in combustion, the nitrogen and oxygen in the air bond together and form oxidised compounds of nitrogen, NOx. Here, the x refers to a family of compounds. The most regulated form of oxidised nitrogen is nitrogen dioxide (NO2) since  it is particularly reactive and often generated by human means (Clean Air Technology Center, 1999). However, nitric oxide (NO) is also created anthropogenically and although it is not heavily regulated, chemical reactions can convert it into NO2 and other hazardous pollutants. Vehicle engine combustion, gas turbines and industrial boilers for power plants are some of the main sources of anthropogenic NO and NO2 production.

First proposed by the Russian physicist Yakov Borisovich Zel’dovich in 1946 (Zel’dovich, 1946), the equations that describe this oxidation process during combustion are as follows (Fluent Incorporated, 2003).

Each of these reactions are temperature dependent, with considerably greater yields at high temperatures. Once released into the atmosphere, the NO oxidises within a few hours to form more complicated oxides like NO2.

The peroxy radical (HO2∙) can be an alternative precursor for the creation of NO2. It is usually formed when hydrocarbons or volatile organic compounds (VOCs) are oxidised into unstable radicals, which rapidly react to the surrounding oxygen and create HO2∙. Peroxy then oxidises NO with the reaction,

The produced hydroxyl radical (∙OH) is then recycled with the hydrocarbons or VOCs to create more peroxy radicals. Therefore, the oxidising process of NO can last over long transport distances in a plume containing VOCs, hydrocarbons, and NOx.

The effects of NOx­ on the environment include the potent greenhouse gas nitrous oxide (N2O) – a common sedative known as laughing gas – as well as being an irritant of the respiratory system, eyes and skin in the form of NO2 (US National Library of Medicine, 2017). Like carbon monoxide, NO also has the potential for limiting the absorption of oxygen in the body. This means that long term exposure to NOx gasses can lead to severe health issues.

But most importantly, NO2 can kickstart many other chemical reactions that require its presence (Clean Air Technology Center, 1999). Often, these reactions require the catalyst of sunlight and can occur downwind of the emitting source since NO2 has a long lifetime. This is one of the reasons that the secondary formation of NO2 can be so dangerous to the environment.

One such compound is tropospheric ozone (O3). Although not strictly a nitrogen compound itself, ozone is formed as a secondary pollutant with nitrogen oxides as crucial reactants.

If ozone forms in the stratosphere, far away from living respiratory systems, it is beneficial to the environment. Stratospheric ozone helps protect the Earth from ionizing solar radiation and limiting the depletion of this high atmospheric ozone layer has been a scientific concern since the 1970s (Handwerk, 2010).

However, O3 that is formed much closer to ground level, in the troposphere, can cause severe health concerns. A common component of photochemical smog, this highly unstable molecule can damage materials like rubber and plastic. It can also damage plants and inflame lung tissues if inhaled, increasing the permeability of cells and rendering them more at risk to other toxins and microorganisms (California Air Resources Board, 2016).

Tropospheric O3 is formed when sunlight breaks apart NO2 molecules into NO and a free oxygen radical. This free oxygen is unstable and joins a molecule of O2 in the surrounding air, thus creating O3. The process can be summarised with the following chemical reaction (Warneck, 1999).

Where O(3P) represents atomic oxygen, and the required wavelength (λ) of the catalyst sunlight must be less than 400nm, typically in the ultraviolet range.

As mentioned earlier, O3 itself is still unstable. This means that it will react with other nearby compounds, releasing its third oxygen atom and returning to the more stable and breathable O2 molecule. NOx is one family of compounds that can be further oxidised by O3. N2O, for example, is one of the largest anthropogenic destroyers of stratospheric ozone (National Oceanic And Atmospheric Administration, 2009) (Portmann, Daniel, & Ravishankara, 2012).

The complex balance of nitrogen compound pollutants reacting back and forth down the length of a plume is part of why the secondary pollutant problem is such a difficult one to solve. At some places downwind, the balance may shift towards safe and breathable air, while later, the tropospheric ozone concentration can reach hazardous levels in a region far from the origin of the compounds. Minimising the ability for the initial reaction to occur by limiting the NOx emitted into the troposphere can help keep not only local populations and ecosystems from ozone damage, but also those situated kilometres away.

Another of the compounds that can be created from excess levels of NO2 are peroxyacyl nitrates, or PANs for short. Like tropospheric O3, PANs are a component of photochemical smog, the combination of harmful pollutants near ground level in urban areas. Although PANs are irritant to respiratory systems and damaging to plant matter, their main problem is their role as a long-range vehicle for NOx transportation (LaFranchi, et al., 2009). PANs are a family of stable oxidants with a longer life than what NOx compounds have on their own. They are formed when a peroxy radical (HO2∙), the same kind that can be used to oxidise NO into NO2, reacts with VOCs to create an acyl peroxy radical (with the general structure RC(O)O2). The acyl peroxy then combines with NO2 to form a peroxyacyl nitrate. This production acts as a sink for both NO and NO2 in urban areas and can carry the nitrogen oxides much further downwind than they would otherwise normally reach.

Importantly, the chemical reaction for the formation of PANs is reversible with a strong temperature dependence to the equilibrium. The chemical equation reads,

where R represents a hydrocarbon chain.

Once formed, the PANs travel until they reach environmental conditions that cause them to decompose again, usually at higher temperatures. Downwind of the NOx and VOC sources, the surrounding NO2 levels have also generally decreased. This allows the equilibrium to shift back to the left and inject NO2 into a warm, sunny environment – ripe to produce tropospheric O3.

The long-distance stable transportation of NO2 to areas oceans away from the initial polluting source is PANs’s most harmful quality. Limiting the heavy production of initial reactants is a crucial step towards minimising the secondary polluting potential of any atmospheric emissions.

Downwind deposition of nitrogen compounds like NOx and ammonia (NH3) can also cause environmental concerns. The most common effects include acid rain and eutrophication of aquatic systems. In both cases, the NOx itself is not the inherent problem, but the effects that the compound can produce through biological or chemical interactions can be devastating.

Acidic deposition, more commonly referred to as acid rain, is formed when NOx or other pollutants dissolve in moisture. For the scope of this article, we will focus on nitric acid (HNO3) rain and nitrous acid (HNO2) rain, but other varieties with sulphur and hydrocarbon reactants do exist. An example reaction with NO2 is presented below (Wondyfraw, 2014).

Acidic deposition does not have to take the form of rain; the term typically refers to any deposited precipitation with a pH lower than 5.6. This can include fog, snow, sleet and even dry acidic particulate matter or gases. There are some natural sources of acidic deposition, such as volcanic activity, but a large fraction of acid rain is still produced by reactions of anthropogenic NOx.

Acid rain is harmful to aquatic life and vegetation due to the increased acidity character in bodies of water and soil. This can impact the reproduction cycle of organisms like fish, as well as slowly poisoning plants. Crops that have been subjected to acidic deposition, when ingested by humans, can also pass on toxic properties. The precipitation itself can even cause respiratory problems to people exposed to it, as well as corrode manmade structures like railway lines, aeroplanes, and buildings (Wondyfraw, 2014).

Another form of harmful nitrogen deposition can come in the form of nitrification. Ammonia and NOx emissions can travel downwind and become deposited in aquatic systems, upsetting their nutrient balance (Clean Air Technology Center, 1999; World Resources Institute, 2020). Ratios of nitrogen to phosphorus, silicon and iron become large, inducing sudden plant growth such as toxic algal blooms. These blooms cause a large shadow across the body of water, causing other plants to be starved of sunlight. This leads to a hypoxic state of the water, where plants die, sink and decay. The lower levels of the water therefore become uninhabitable for both marine plants and animals – all through excess nutrient content contributed by a nitrogen compound emitted kilometres upwind.

Again, these nitrogen-based environmental consequences are formed in the atmosphere after the primary emission has been released. For this reason, it is important for the initial NOx family of pollutants to be regulated and monitored, especially direct emission of the key reactant NO2.

The removal of NOx from combustion processes is a complex issue, since it is released when any fossil fuel is burned (Wondyfraw, 2014). Ways to reduce NOx emissions include (Clean Air Technology Center, 1999):

For a more detailed exploration into the technologies available, we recommend the US EPA’s technical bulletin on the subject (Clean Air Technology Center, 1999), but scientists and engineers have been trying alter combustion methods for years in an attempt at minimising the harmful effects of NOx and other trace gases released through the process.

Alternative energy sources to combustion are another excellent way to reduce harmful NOx emissions (Wondyfraw, 2014). Hydropower, solar energy, and wind farms do not require the high temperature reactions which produce NOx. As technology improves, these sources of energy could be an excellent alternative for everyone effected downwind of coal powered stations and heavy traffic.

This interconnected web of chemical reactions and secondary impacts is just a fraction of all that can occur through anthropogenic emissions. Other families of compounds can evolve in their own ways, further highlighting the importance of catching as many potentially harmful trace gas emissions as possible. When taking inventory of possible emissions, it is important to remember that even though something may not have an immediate impact, this does not mean that it won’t cause harm kilometres downwind after it has transformed.

Handwerk, B. (2010, May 7). Whatever Happened to the Ozone Hole? Retrieved from National Geographic News: https://www.nationalgeographic.com/news/2010/5/100505-science-environment-ozone-hole-25-years/

Portmann, R., Daniel, J., & Ravishankara, A. (2012). Stratospheric ozone depletion due to nitrous oxide: influences of other gases. Philosophical Transactions of the Royal Society B: Biological Sciences, 1256-1264.

US National Library of Medicine. (2017, May 31). Nitrogen Oxides. Retrieved from ToxTown: https://toxtown.nlm.nih.gov/chemicals-and-contaminants/nitrogen-oxides#:~:text=Nitrogen%20oxide%20pollution%20is%20emitted,especially%20from%20electric%20power%20plants.&text=Nitrogen%20oxides%20and%20sulfur%20dioxide,produce%20rocket%20fuels%20and%20expl

Tweets by AndrewBalch
We use cookies to enhance your experience. By continuing you agree to their use. More info is in our website terms and conditions.
Go to Top