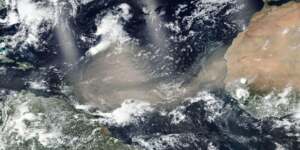 On board the International Space Station, Doug Hurley witnessed an enormous plume of dust crossing the Atlantic and could only describe it as ‘amazing’. The plume is estimated of have extended more than three kilometres up into the atmosphere; it spanned 8,000 kilometres in length, and carried over 180 million tons of dust. The skies darkened over Miami, Puerto Rico, and the Caribbean. In its path, the air quality was reduced to hazardous levels. Beaches were closed. ‘Godzilla’ had arrived.

‘Godzilla’, as this particular dust plume has been nicknamed, made landfall on the Eastern Americas in June of 2020. While this event was extraordinary in magnitude, it is actually part of a regular phenomenon known as the Saharan Air Layer (SAL). The SAL is formed in the Saharan summer as hot air from the desert rises, through convection, up through the atmosphere. As the air rises, it takes with it much surface sand and sediment kicked up by local surface winds. The plume is then usually carried eastward by the prevailing westerly trade winds north of the equator. The very same winds that Europeans once relied on to sail to the New World and colonise the Americas, were now carrying ‘Godzilla’ instead.

As ominous as it sounds the SAL is actually quite beneficial to the natural environment. For instance, the Saharan sediment is quite nutrient rich as the Sahara was once a sea floor, and the nutrients from the sediment are deposited in the ocean, where they nourish phytoplankton, and forests of America, particularly the Amazon, where they enrich the soil. Also, the dry dusty air mass is believed to interrupt the formation of hurricanes, which are seasonally very common in the summer months, especially around the equator.

Unfortunately, more dust in the air is not always a positive. Film experts estimate that over the years, the fictional on–screen Godzilla has killed about 1.5 million people. By contrast, experts from Harvard University estimated that the adverse health effects of particulate matter in the atmosphere contributed to the premature deaths worldwide of 4.2 million people in 2018 alone. Dust in the atmosphere, and its danger to human wellbeing depends very much on the sizes of the particles themselves.

Larger dust particles are actually not too hazardous as they are generally too large to be carried great distances except in extreme events. Particles with an aerodynamic diameter less than and equal to 10 micrograms, are classified as PM10. At this size the particulate matter can enter the eyes, nose, and upper respiratory tract. This is a cause of mild discomfort to most, but it is a serious risk to those with existing respiratory conditions such as asthma, bronchitis, and, more recently, COVID-19. Particles with an aerodynamic diameter less than and equal to 2.5 micrometres are classified as PM2.5 and at this size they are able to be absorbed by the lungs and enter the blood stream. Once there they drastically increase risk of cardiopulmonary issues such as heart attack and stroke. In 2014, it was estimated that PM2.5 pollution was responsible for 400,000 premature deaths in people over 30. There is no safe level of PM2.5.

The hazards of particulate matter are present all around the world. In fact, the ‘Godzilla Plume’ affected comparatively few people as it was mostly spread out over the Atlantic Ocean. Dust storms worldwide are actually most common in Northern China and South Korea, where dust from deserts in Mongolia, nicknamed ‘Yellow Dust’, is carried and deposited via the jet stream wind currents. Just a couple of months ago in March 2021, South Korea was blanketed with this ‘Yellow Dust’ causing concentrations of PM10 to increase to ‘very hazardous’  levels. The ‘Yellow Dust’ is also believed to interact with pollution in the region and influence the occurrence of acid rain. 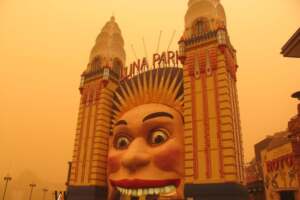 Closer to home, Australians are no strangers to the dangers of particulate matter. Few can forget Sydney’s dust storm of 2009 (pictured above), or the bushfires of 2020 that covered 10 million Australians in a blanket of smoke for the entire summer months. Both of these events were strongly correlated with an increase in hospital admissions for respiratory conditions.

However, there does not have to be a specific weather event for dust to be a hazard to your health. Workers in the agricultural, forestry, and construction industry have to manage this risk on a daily basis, and anyone residing close by to these activities must also note how particulate matter pollution might impact them, and subsequently take the relevant actions to mitigate this risk.

The ‘Godzilla’ Dust Plume was a truly extraordinary event, but we should not need an Astronaut to notice before we take action against dust pollution. Often the particles may not even be visible to us on the ground, but they are still there, and they are still a risk. We as business owners, employees, and citizens must all be aware of hazardous particulate matter, whether man-made or not, as it is more dangerous than a radioactive lizard the size of a skyscraper.

Tweets by AndrewBalch
Go to Top